The Assassination of James Forrestal

The second edition, with its first of two new chapters, reveals that the stories that Forrestal had experienced some sort of sudden breakdown, prompting his hospital confinement, are almost certainly false. The second new chapter presents evidence that the deaths of other prominent and influential individuals, including that of T.E. Lawrence, the famed “Lawrence of Arabia,” were likely assassinations, and they might well have been done by the same people who were responsible for Forrestal’s death.

Overall, using primarily information provided in the Navy's official investigation of the death of America's first Secretary of Defense, which had been kept secret for 55 years, The Assassination of James Forrestal thoroughly demolishes the widely believed view that Forrestal's fall from a 16th-floor window of the Bethesda Naval Hospital on May 22, 1949, was an act of suicide. The official report, in fact, did not conclude that Forrestal committed suicide. It concluded only that the fall caused his death and that no one in the U.S. Navy was responsible for it. A major reason why the suicide thesis is still widely believed is that the news of the release of the official report, which the author obtained through the Freedom of Information Act in 2004, has been effectively suppressed. Building upon what he has long made available on his web site, and in the manner of his 2018 book, The Martyrdom of Thomas Merton: An Investigation, co-authored with Hugh Turley, David Martin breaks through the wall of silence and misinformation. This meticulous examination of the violent death of the leading government critic of American support for the creation of the state of Israel is vital to an understanding of U.S. and world history since the mid-20th century. 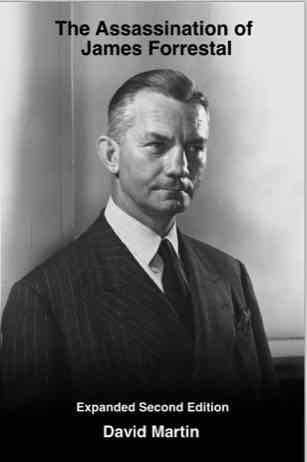 Forrestal was a wealthy and pugnacious Irish Catholic, and I think there is very considerable evidence that his death was the result of factors quite similar to those that probably claimed the life of an even more prominent Irish Catholic in Dallas 14 years later.

The verdict of murder followed by a massive governmental cover-up seems solidly established.

David Martin makes a compelling case that Forrestal was murdered, and that his murder was ordered by the Zionists, most probably with the knowledge and approval of Truman...

The short groundbreaking 1966 book, The Death of James Forrestal, by an anonymous author using the pen name of "Cornell Simpson" has been put online in PDF form by Christians for Truth.  It is heavily referenced in The Assassination of James Forrestal.  Ignored by the national press when it was published, it has always been hard to find.   Amazon currently lists it only as "Out of Print--Limited Availability."  As of this posting, Alibris and AbeBooks are asking $479.95 for a used copy.